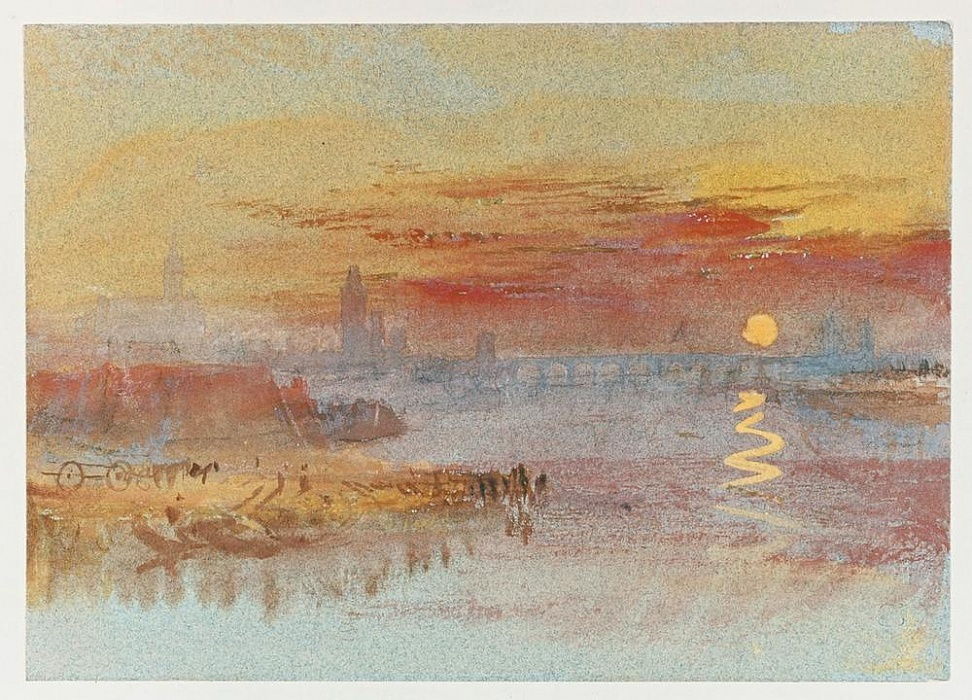 “I paint what I see, not what I know”, from this sentence of the nineteenth-century English painter William Turner (1775-1851) began the studies on air pollution in the paintings of the past by a Greek scientist Christos Zerefos, specialist in Atmospheric Sciences at Athens University and published on the Revue Chemistry and Atmospheric Sciences.

But let’s take a step back and start with the manufacture of the colours.

In ancient times, every painter produced his colours from natural substances mixed according to proportions that each one jealously guarded and whose fundamental requirements, especially in the Middle Ages, were brightness and intensity. In order to have the widest range of colours and shades they used to grind hard stones, blue from lapis lazuli or basic copper carbonate, they used juice or plants extract for purple, spices, such as saffron for yellow, and so on.

Then, in the 19th century, Turner, and like him other artists of the time, exploited the progress of Chemistry by using colours obtained by mixing pigments with a mixture of linseed oil, resin and lead acetate which catalysed the formation of gel and gave structure to the product.

The real revolution of the colours thus made, was that, thanks to the elasticity of the gel, drying became so rapid that it was possible to lay several coats of paint on top of each other without waiting even for many days, as was the case with oil paints, so that the paintings were now completed in much shorter time than months and, sometimes, even years, as it used to be. Turner himself would not have been able to make his large paintings if he had painted them with oil paints. As we have said, Turner, a romantic painter, used these colours and his sunsets are among the most appreciated paintings, but from their depiction researchers have traced the degree of air pollution at that time. In 1815, the Tambora volcano erupted in Indonesia with great intensity. As we know from the Earth Sciences, very powerful eruptions release large quantities of ashes into the air circulation that often change the climate by darkening the sun. In 1815 this phenomenon occurred, so intense that the ashes continued to circulate the following year that it was in fact called “the year without summer”. And Turner, who, as we said at the beginning, painted what he saw, depicted this. In his paintings, the presence of considerable amounts of green and red allowed scientists to calculate the amount of aerosol in the atmosphere at the time of painting. Sunsets are the most indicative part of the day for this analysis because it is the time when the angle that the sun’s rays form with the Earth is such that they pass through a thicker layer of atmosphere that filters the short wavelengths of the green of the visible and, to a greater extent, the long ones of the red. This effect is increased by pollution and by the products of volcanic eruptions for greater filtering power of atmospheric particles, thus dispelling the romanticism of flaming sunsets.