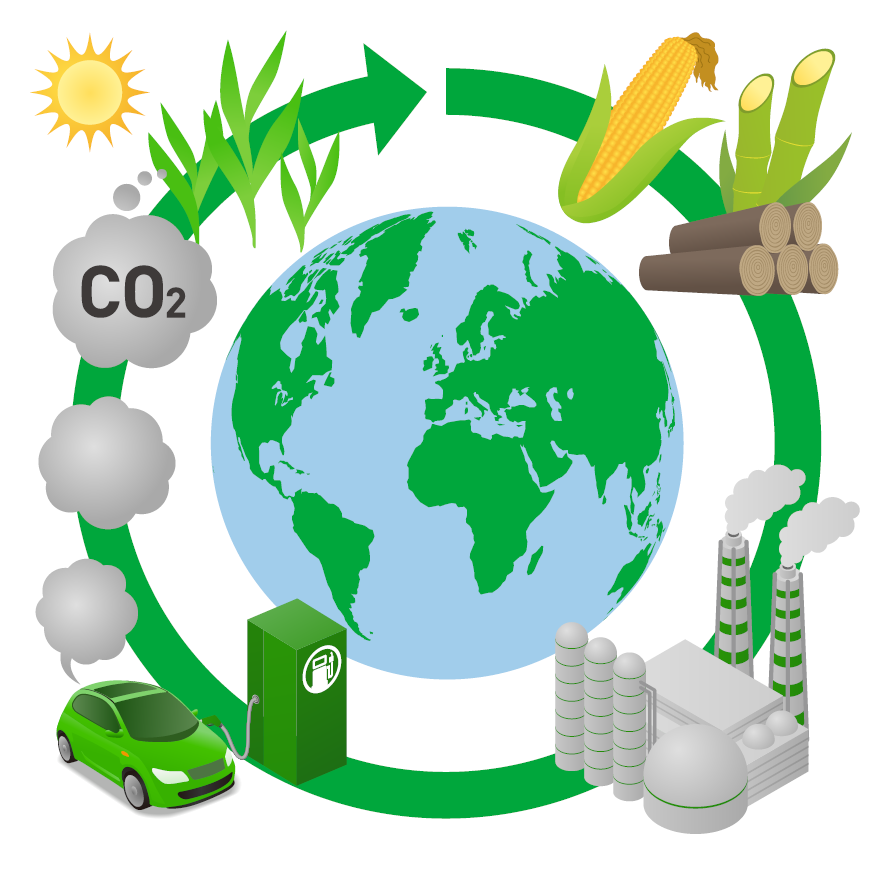 Autotrophs (from the Greek autos = from itself and trophos = to eat)) are organisms that produce their food by collecting energy directly from the environment. All organisms need carbon and autotrophs get it from inorganic molecules such as carbon dioxide (CO2). Plants and most other autotrophs produce their food through the metabolic route of photosynthesis. During this process, solar energy is used by plants to transform carbon dioxide and water into sugars and oxygen.

Most energy is contained in the chemical bonds of molecules synthesised by plants. That energy can feed heterotrophs, like when an animal cell feeds ATP synthesis by breaking the bonds of sugars. It can also power our cars, which move thanks to the energy released by burning biofuels or fossil fuels. Both processes are basically the same: the release of energy occurs by the breaking of the bonds of organic molecules. Both use oxygen to break those bonds, and both produce carbon dioxide.

Maize and other food crops, such as soy and sugar cane, are rich in oils, starches, and sugars that can be easily converted into biofuels, thus non-fossilized organic matter such as fossil fuels.

Starch in maize grains, for example, can be fractionated into glucose by enzymatic means, which in turn is converted into ethanol by the action of heterotrophic bacteria or yeasts.

The manufacture of biofuels from other types of plant material requires further steps, because the high cellulose content, an insoluble carbohydrate whose bonds are very difficult to break to obtain its glucose monomers, adds an industrial cost that is still very high. Researchers are currently working on cost-effective ways to cut down abundant cellulose in fast-growing weeds and agricultural waste such as wood chips, wheat straw, cotton stems and glumelle (inedible hard shells) of rice.

However, the problem with these biocrops is the competition between their use as fuels and our food supply.

For some years now, in Mexico, a farmer cultivating prickly pears to produce the flour used to make tortillas, has understood that with all the waste from processing it is possible to easily obtain biofuel. The real revolution lies in the fact that prickly pears are grown in poorly fertile soils that are therefore not deducted, as for maize, from crops that are useful for human supply, with the addition that it is a crop that requires a minimum amount of irrigation water. In this way, areas destined for abandonment and emigration are exploited in a profitable and sustainable way. In addition, biofuel from prickly pear waste is less expensive than that one derived from maize.

In Europe, a specific Commission is studying the introduction of an obligation for airlines to use a minimum amount of biofuel for each flight. The SAS (Scandinavian) and Lufthansa (German) airlines started, even before the legal obligation, to create the possibility for “green” passengers to buy tickets with a higher and stated cost for the use of biofuel that is less polluting than kerosene, but much more expensive.

ACTIVITY: Which goals of the 2030 Agenda fit the topics of this reading? Write a short text.