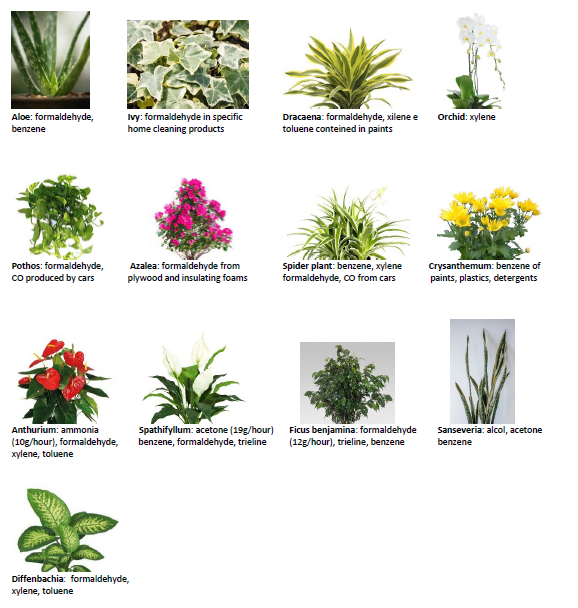 In the late 1980s, a study led by the NASA to develop a system to clean the air in space stations suggested that some interior landscape plants may purify the air thanks to particular enzymes and provide a natural way of removing indoor air pollutants.

In fact, in addition to smog many types of pollutants can contaminate the indoor air quality within our houses, i. e. volatile organic compounds used in cigarette smoke, paints, plastics, sprays, insecticides, glues and cleaning products.

One of the most harmful substances we breath in home environments is formaldehyde. It is a product of combustion, i. e. gas stoves combustion and cigarette smoke, but it is also found in some types of paints. Formaldehyde is the simplest of the aldehydes (methanal), a colorless gas with a strong pungent odour which can easily dissolve in water – its compound is called formaline – and it is industrially obtained by the oxidation of methanol.

Formaldehyde is a powerful bactericide and is therefore contained in various products ranging from domestic disinfectants to textile manufactoring, to the production of polymers and other chemical compounds. Strong concentrations of formaldehyde can be found in every home because its resins are in coatings, various articles and insulating foams, glues, products that release molecules into the environment: that’s why it is considered one of the most common indoor pollutants. Formaldehyde has harmful effects on human health because of its ability to cause nasopharyngeal cancer and to interfere with the links between DNA and proteins.

Cleaning products often contain ammonia, a nitrogen compound, which is a colourless gas with a pungent odour that makes us breathe polluted air. In fact, ammonia is irritating to the respiratory tract and eyes.

When dissolved in the blood, ammonia raises pH value by increasing the affinity of hemoglobin with oxygen until it is unable to release it into tissues. In order to reduce the concentration of ammonia in the rooms, you should only take care to cover the containers well, placing them in closed cabinets.

Other air pollutants are benzene and its derivatives such as toluene and xylene. Study the structures of benzene and its derivatives with exercise 39. Benzene, the parent of aromatic compounds, is a petroleum-derived compound. It is a colourless, highly flammable liquid present at high concentration levels in the air because it originates from industrial discharges and vehicles, but also from natural events such as fires and volcanic eruptions. The main effects of a permanent exposure to benzene are damage to bone tissues and a decrease in bone marrow cells resulting in a reduction in the amount of red blood cells and leukemia. It can also cause damage the immune system.

In indoor environments, pollution by benzene and toluene, but also by formaldehyde, is intensified by cigarette smoke that contains these toxic substances.

Of course, not smoking at home and using non-polluting products is a way to get more breathable air. However, since it is not possible to eliminate all the poisoning agents, we can ask for help from some plants that, besides beautifying the environments, can give us a hand to clean the air. In the following figure are listed 13 plants best suited for this purpose.

ACTIVITY: Identify which goal of the 2030 Agenda goal refers to the text you have read.