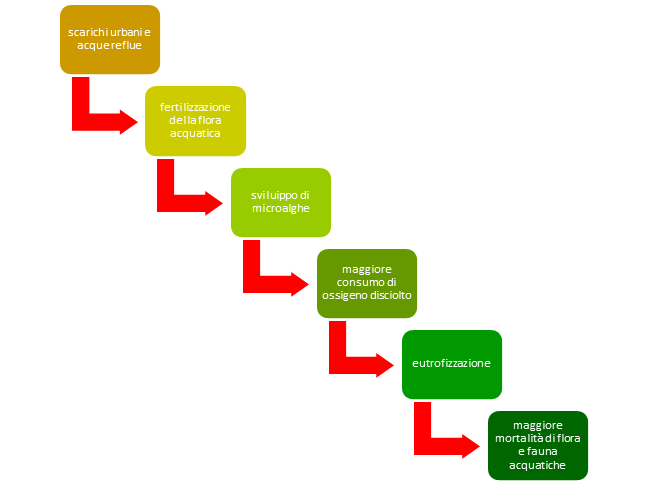 Eutrophication (from Greek eutrophos, “well-nourished)” consists in the overly fertilization of a body of water, often induced by the discharge in to an aquatic system of nitrate or phosphate – usually found in detergents, fertilizers, minerals, or sewage coming from animal husbandry.

This phenomenon causes not only the pollution of waters, but also the uncontrollable and excessive growth of some algae; as the life circle of some of this aquatic vegetation ends, the decomposition system produce a large depletion of oxygen in these body of water, resulting in massive ecosystem damage.

As a matter of fact, the lack of oxygen may lead to fish and lots of aquatic plants decimation, during which the massive bacteria putrefaction that comes after helps to create the formation of toxic and malodorous substances, like ammonia, phosphine and hydrogen sulphide, that pollute waters and prevent the normal life cycle.

And we have yet to consider another plague that nowadays affects our Earth: global warming.

The surface of the water area becomes warmer and so can’t mix with water coming from the depths, therefore doesn’t give to the waters from the depths the oxygen needed; the consequence of this is that the concentration of oxygen is lower, because of a lesser solubility and a higher demand by degrading bacteria.

This dangerous and lethal phenomenon has its most devastating consequences on lakes, as water exchange is slower because slower are tributary and emissary rivers.
In nature, water bodies have their own self-purification system, most notably thanks to the microbiology that can oxidize biodegradable organic substances, this process takes a very long time to complete and is currently overcome by the constantly increasing level of water pollution.

ACTIVITY: Which goals of the 2030 Agenda fit this reading?